Our Allotment in March 2022

March a month when you finally see some flowers, but most importantly a month when we celebrate our lasses birthday and our wedding anniversary.

Our lass has a lot more faith in me than I do in myself. We completed the fencing which had taken a while but it was a bit at a time job, do a couple of posts connect the pallets carry on. But we finished it. YAY!!!

Our Allotment in January 2022

They sing about don't fence me in and wanting land lots of land. There are times though when you want to know your borders. January was fence repair and replacement time

From Storm Arwen to the end of the year 2021

Our first full year came to a close with the possibility of everything being blown away, a category red storm was heading our way and although we were on the edge of the red zone it still didn't fill us with much confidence. Expectation was for devastation and heart break, as it wouldn't have been just the issue of replacing what we had as all things can be replaced. But! it would have been seeing the memories being scattered around the allotment. Our lass is much more sensible and pragmatic in her approach, we would have just re built, at least it would have been nature and not vandals our lass said. Fortunately our green man which is hung over the shed doorway protected us, unlike a lot of our neighbours who had seen fences down, broken glass in green houses and whole polytunnels skip down an allotment or five from its original position. We were very lucky to escape unscathed.

As we prepare for the coming seasons.

Life all around us seems to be forever in the pursuit of looking backwards, dissecting what has happened but alternatively an allotment does help you look forward to the future. You may well look back upon successes and failures but when you are down the allotment you seem to be in a constant state of what does the future hold?

Our future down the allotment is of hopes and ideas, the learning of what you have enjoyed growing, and growing more of this produce in the coming year and the willingness to accept that the likes of carrots are far cheaper to buy by the bag at Asda than try to spend months growing them to then be devoured by carrot fly. With encouragement from our lass I have grown within myself in regards my abilities to build what is around us at the allotment and our lass too has had the enjoyment of success. We have both enjoyed the ability of just simply being, to lose hours but gain fulfilment.

We have done plenty, but I have lost the initial condition a lot of new allotment holders suffer which is called the Mimi syndrome. best described as look at me, yes me, look what I have done, as though no others had done the same before.

One year on down Our Allotment

We have been on our full sized allotment for just over a year now and our time upon it has been an interesting growing year. We grew lots of onions where we envisaged growing none, two beds of sweetcorn, one as the back up as well as the first planted but both grew. An absolute bumper crop of strawberries, a daily supply of raspberries, potatoes, potatoes, potatoes although wire worm and a pest was a slight issue. Our lasses flowers grew well, with an initial would we grow any to having various displays which have done very well and brought the colour to the allotment our lass wanted. If the rhubarb is anything like it's growth in the first year we should have a bumper harvest when we can finally pick some next year, we also have to tame the octopus of a blackberry bush and reposition the raspberries.

All in all it is as always an adventure, you travel along not knowing exactly where you will end up. Vegetables we thought we would want to grow have dropped out of favour such as carrots, we will be doing a multitude of peas and beans next year and I, with the knowledge of growing tomatoes this year will be more selective and use a slightly differing technique for growing, so as to not have such a glut but a high quality tomato for our lass.

It has taken a year but I have also got out of my system the need for telling the world "Look at what we have produced" I am sure it is some sort of allotment owners ailment. Feeling as though you were one of the first to grow or do something and get the urge to tell the world. It is why there has been such a big gap between the last posts. I have still been taking photographs so you can see the before, the during and the after, but in the future it will be a bi weekly or monthly activity on here. This is our diary to look back at what we have done.

So with that, here are some of our latest photographs 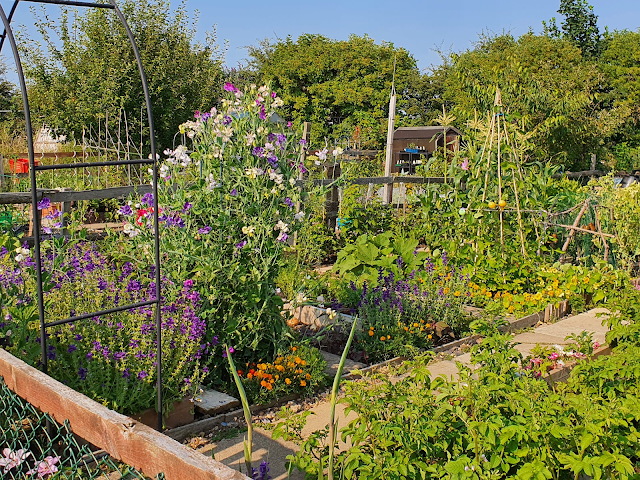 The sweetpeas as you can tell have done very well and the scent could be quite powerful en masse as they were. 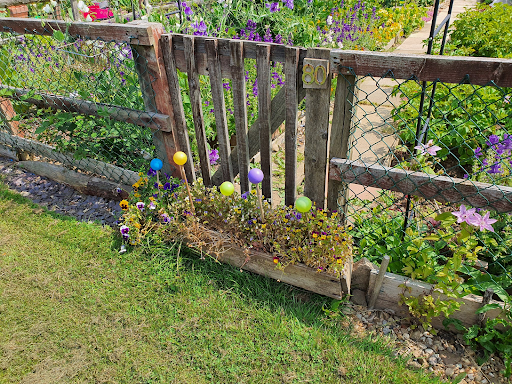 Not everything has been perfect, the day our stuff got moved, but lets move along ourselves, next photograph please. 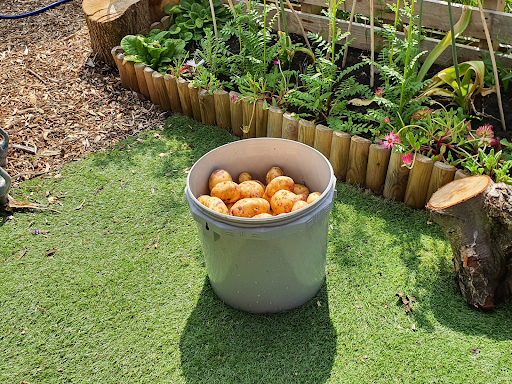 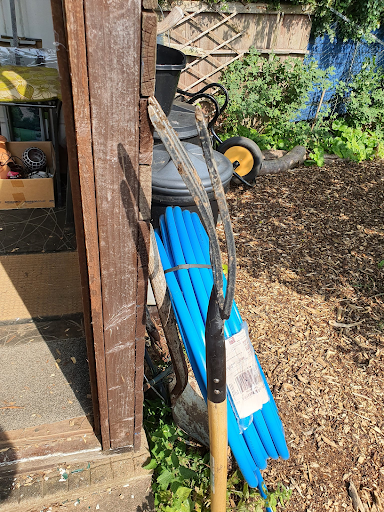 It is not a party trick, but every time I use a fork I manage to bend one of the tines on it.... 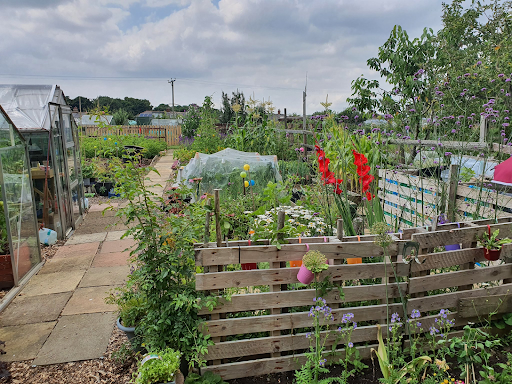 July 26th, just taking in the view down the allotment. 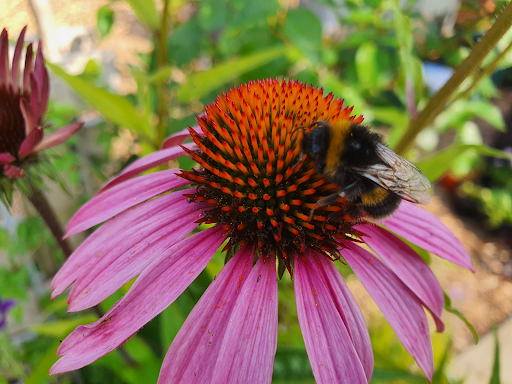 Isn't nature great. Must admit in this instance the bee was quite drunk on the pollen gathering so made it easier to take the photo and for once my camera took a good shot. 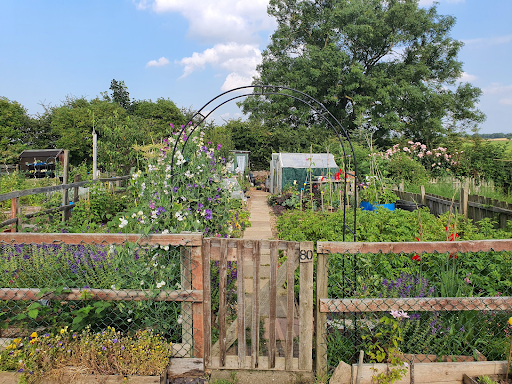 End of July looking back at the allotment as we are about to go home. 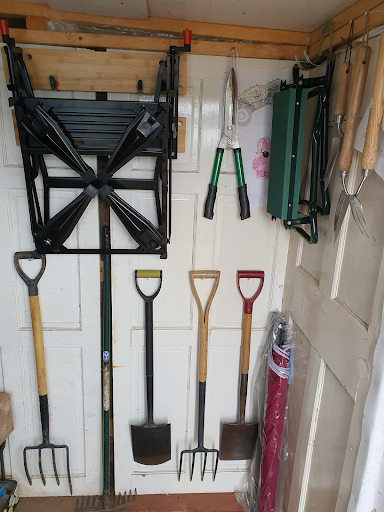 A tidy shed, finally made use of the work bench, so at the same time had a tidy up. 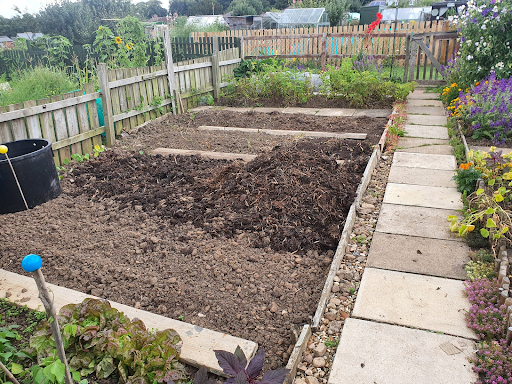 Potatoes coming out muck going in 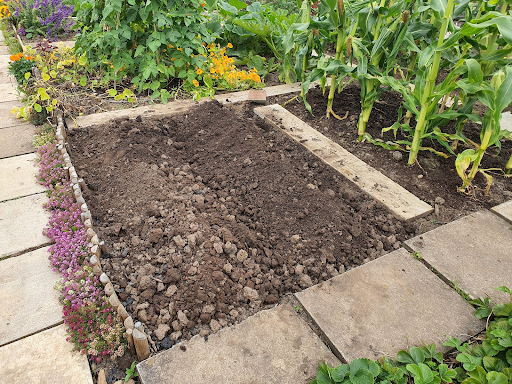 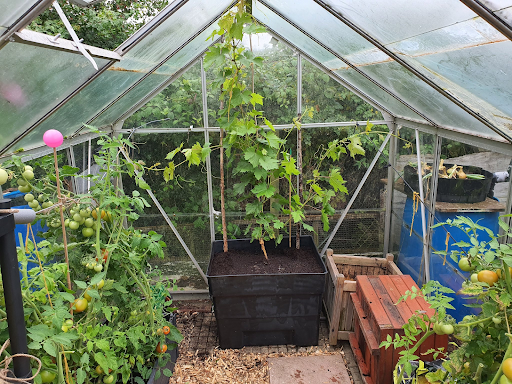 Grape vine put into place in the green house, as you can see the end of the tomatoes for this year, such a bumper year we had to give buckets full away on freecycle. 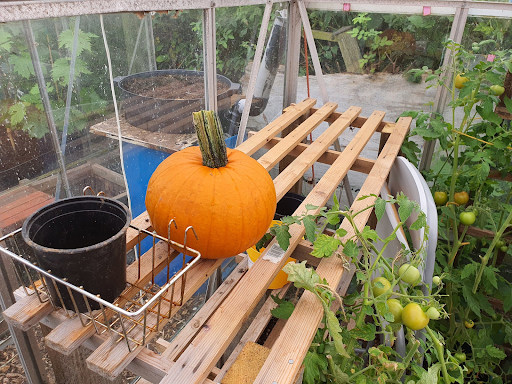 Our first pumpkin a little early but does need at least 2 weeks to mature. Will report back to how well it stores. 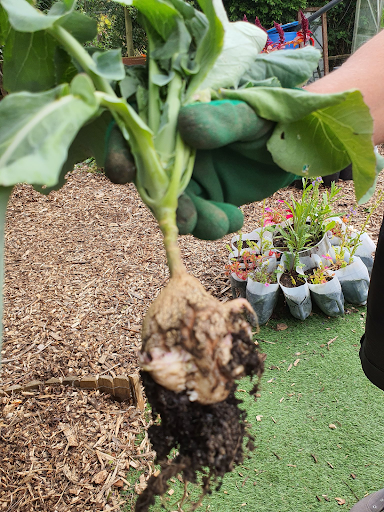 Club root, not good for the cauliflower, no more of them for a while it seems. 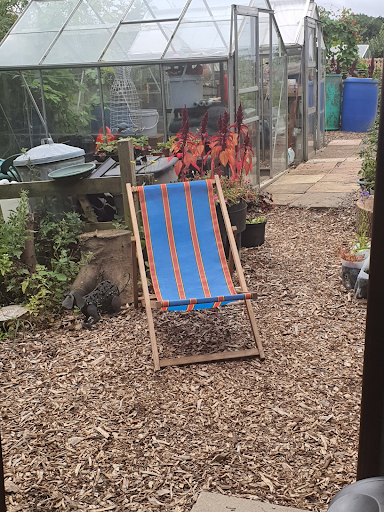 Our lass had been looking for a deck chair for quite a while, finally got one at a great price. 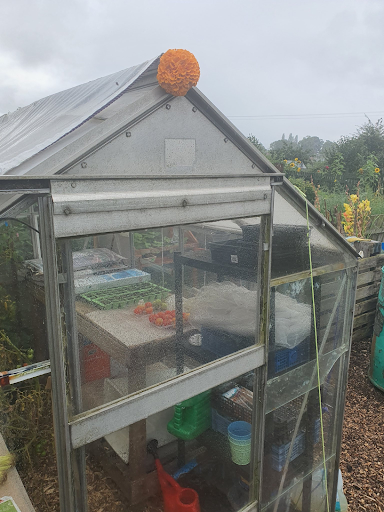 The Best Exotic Marigold Greenhouse. This was our best marigold bloom at the time and it got snapped, so seemed a fitting addition to the greenhouse 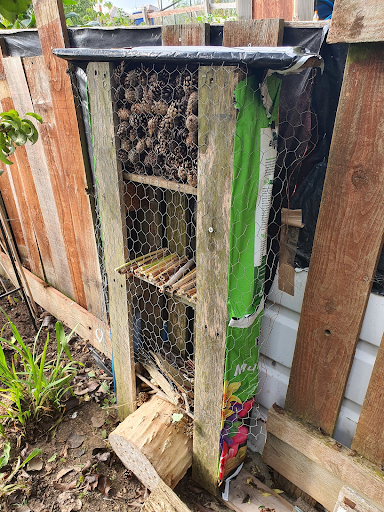 Our new bug house to be completed

I think with the amount of photographs I have just put up, I really need to keep on top of this blog as we do the allotment itself.

This is our blog, mine and our lasses, a diary for us so we can see how the allotment has been transformed over time and how projects have progressed. Who knows it might also be helpful for anyone else out there. We took over the full allotment on August 30th 2020 but started the blog Oct 21st 2020.
Thank you for taking a look.

If you wish to use any of the photographs on this blog commercially or on a for profit basis, please contact us via the comment button under the photograph which is of interest to you, leaving your contact details for us to respond, as you need to get our express permission to use any of our photographs from this blog. - Alternatively if you are using any of our content/photographs on a personal non-profit basis, you are free to use them but you must attribute them back to this blog. Linking back to the post they were taken from and also a link to this main blog ournewallotment.blogspot.com/ The link below would give you advice on UK copyright UK copyright advice link

Places where our allotment have been featured.

Sites which link back to this blog.